There are several thousand known minerals in nature (estimates ranging from 2,000 to 7,000), but fewer than a hundred are considered gem-quality minerals. Of these, only about a dozen or so are actually valuable enough to be considered "important gemstones" on the world market. 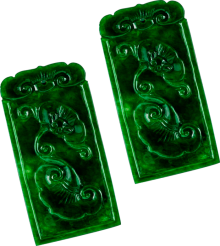 Dazzling with its strong, transculent green hue, and weighing 3.71 and 3.40 grams, respectively, this Jadiete pair of “tablets” are incredible as jewels and as artifacts. One one side, there is a carving of a dragon, which symolizes power and is one of the most prominent figures in Chinese culture. The other side has a traditional carving of a bat, another prominent figure in Chinese culture, which represents longevity. They can be preserved and displayed for those who value the historical and cultural features of this item, or worn as a pendant or earrings for those who prefer to bear their culture in public. They can be passed to the next generation and held as a keepsake for centuries.

Both are accompanied by certificates from the Hong Kong Gemmological Laboratory, which classifies both of the Jades as “Type A, Jadeite”.